Danny Kept Me Up All Night! 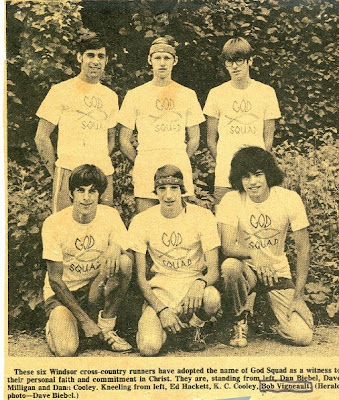 I started hanging around with Christian kids in 1970 when I was 15 years old; the chief reason was a record breaking cross country runner named Danny Biebel. He was one of those young men who just seemed to do all things well. He was a son of a Baptist preacher who wasn't afraid to bring his faith to school, to races or to wherever he went. Danny was a natural leader and because of his athleticism, aspiring athletes were drawn to him - I sure was. He mentored us on running and the Bible and the discipline required for both of those studies.

In '72 I faced a crisis of faith and of being. My parents were headed toward divorce and a series of events that typically rocks the security and comfort zone of the children of divorce. I thought that being a Christian would make me immune from such messy disturbances. I wanted to be a Christian for the camaraderie, for the running, for the bliss. At 17 I was learning that Christianity doesn't change situations, doesn't stop catastrophes and demands your all not just your interest. The price was too much, my experiment with Christianity was over.

That's when the Lord sent Danny to my door. Every time I got together with Dan, there was an interesting ritual that took place.

I'm not sure what Dan would have done or said next, THAT was always enough to get me to turn from my denial and admit that things were bad and I was hurting. I told him that I don't want Christ anymore, it's not what I was expecting.

We drove to the home of a family in the church and Dan asked if we could use their upper room. They said sure. Dan and I went up and sat on the floor for a few hours as he recounted Bible promises and I resisted. He spoke again of Christ's sacrifice but it wasn't enough. He asked me if I wanted to pray - I said "No".

Finally we left and being the middle of the night I was relieved that he would take me home. Instead we drove across the river into New Hampshire and up onto a high hill in Plainfield where the view was amazing. Above us was a vast canopy of stars and below were the lights of houses in the valley. We sat for a long time in silence and then he asked again, "Would you like to pray?"

Dan said, "You see all those lights down there?

"How many of those people do you think have problems?"

Interesting, with that question I now felt that it was God himself who was staring into me and then looking away to let me know He didn't appreciate me wasting time with small talk and avoidance.

Dan explained that God doesn't take our problems away but he also doesn't let us go through them alone. That suffering is common among the children of men but that God brings purpose to our inflictions. I knew that if I was to turn to Christ again it wouldn't be for running, for family, for friends or for fun, it would be a surrender of everything, it would be a confession that I would be willing to lose it all for the prize of knowing Christ.

Being a distance runner, Danny's favorite Bible verse was Hebrews 12:1,2:

Therefore, since we are surrounded by so great a cloud of witnesses, let us also lay aside every weight, and sin which clings so closely, and let us run with endurance the race that is set before us, looking to Jesus, the founder and perfecter of our faith, who for the joy that was set before him endured the cross, despising the shame, and is seated at the right hand of the throne of God.

Dan again turned to me and said, "So... do you want to pray?"
I knew that the Christian walk would never again be easy but I said "Yes."

Danny had inspired me to become a runner and I thought winning the race was the goal, but in the end he was my hero because he showed me that we win when we STOP and know that Jesus is Lord; that we are more than conquerors when we bow low and acknowledge God's sovereign will, and surrender to His love, His mercy, His plan.

Danny kept me up all night. Thank you Dan.
Posted by Bob Vigneault at 7:15 AM 1 comment: